A knock in the house after everyone else has gone to bed, a creak of the floor boards behind you when you know you’re alone, a wisp of shadow just out of the corner of your eye. Who doesn’t love a good ghost story?

They are classic and unsettling, like in the case of Burnt Offerings,  my first real exposure to a haunted house story. They can also be more thought-provoking, even heartbreaking, such as Peter Straub’s Lost Boy, Lost Girl. The fact that ghost stories remain a big part of cultural identities all over the world and continue to scare today I think comes from our timeless fear of death.

Nobody gets out of this alive.

So when I started to work on In The Ruins Of Hope, I wanted to show my own take on a haunted house. I began to research old world medicine and what procedures were used. While a lot of the practices would make your skin crawl, the most hair-raising were used upon the mentally unwell.

A lot of the time people who were deemed unfit (or unwanted) were sent to asylums. These were most often run or funded by religious groups of one creed or another. While these places may have started out with the best of intentions, they were a breeding ground for abuse.

Starvation therapy, lobotomies, ice baths, holes drilled in the skull, along with intentionally infecting patients with illnesses that would bring on fevers in order to burn the crazy away, were all barbaric treatments.

Many people died in agony because of these “cures,” and that got me to thinking. If there was ever a place with enough suffering to hold a soul, it would be a mad house.

So that became the setting for Hope. It allowed me to explore the idea of what it would mean for a person’s consciousness, their essence, to be trapped in a place that had caused them so much pain.

I came up with the idea of making the actual haunting a sort of ghost dreamland, what I called a phantasmagoria. (Definitions of that word include “…visions seen in fever dreams” and “…a type of horror theater using lanterns to project shadows.”) It was a place you could just fall into, a parallel sort of pocket reality. Which opened up a lot of room for expression. I even manged to tie in a riddle game between murderous sphinx sisters and my heroine.

I’m a sucker for a good riddle, Ever since I was 12 and read my way through The Hobbit.

The whole amount of research done was fascinating and really scratched that history nerd itch. I hope those that have read it enjoyed the story and found the setting as interesting as I did.

Stay frosty out there. 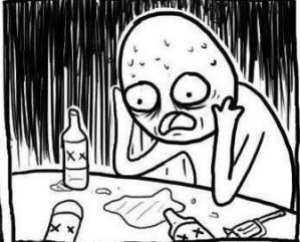