I am a master at playing second fiddle in all of my past relationships. (Notice I said past because I finally got lucky, that is a story for another day though.) It never failed, I did my best work with the lights turned off but wasn’t someone you had around when the sun was up. Quasimodo was my spirit animal.

My first serious girlfriend set the trend. Lets call her Evelyn, because it just feels right. I first met her, get ready for a shocker, in high school. She was a little younger than me but in the same grade and was painfully shy. Our chem teacher paid her a soda to slam a massive book on noble gasses next to my head while I slept in the back of the class. She did it and I nearly peed myself in terror. One look at those pale, massive, double d cup…um…eyes. Yeah, yeah eyes, I was smitten.

See I was in a bad spot. Something I had been dreaming of doing my whole life, told me in no uncertain terms, that I didn’t measure up. I was in constant conflict with my parents and had about two people, outside of my family, who knew more about me than my first name. On top of that I was still suffering from a limp brought on by a car accident, which made me feel broken in the physical sense along with the emotional.

After that we started to hang out after school. I’d walk her to her dad’s office but I had to stop a few blocks down because she didn’t want him to see us together. Something about not being allowed to date, which I was fine with. He was a single parent and worked a lot, so I walked her there almost everyday. I got a part time job and spent a good chunk of that on our dates and little gifts for her. She was mad for wolves and I must have cleaned the main-street store out of canine merch.  After a while we started hooking up at her friend Marsha’s house.

There I uncovered the joys of underage drinking and Evelyn proved the old country song about tequila and clothes completely true.

Things started to wear thin and warning lights began to sound not very long into the relationship. Every argument was settled not between us but by her friend Marsha or Marsha’s mom who had developed an unhealthy obsession with cheap wine and high-school boys. It was never talked out between us, my own views and thoughts on the “us” part of the equation never mattered. Only what her friends thought. Now that is pretty bog standard as far as ex-girlfriend stories go but here comes the curve ball.

While she was practicing a ritual to put a willy curse on my downstairs business, Evelyn would often start to baby talk me. “Did I do good daddy?” was a common one, all in a sing song voice. Now at first it didn’t rub me the wrong way as much as it did later when I started to think about it.

Whenever talk of making things official ever came up, there would be a tactful change of topic. If he’d come over to Marsha’s house to pick her up I’d have to stay in the basement and one time I actually did hide naked in the closet of the spare bedroom because he’d shown up unexpectedly. It was like something out of american pie but the pie was cold and full of unwanted feelings. It was also sweet potato and no one likes that shit.

Then came the final straw. See, she’d met up with me at a skate rink one day (I lived in a town where that was not only still a thing but THE thing) just to give me a letter before texting Marsha so she could bug out of there.

She face to face broke up with me, via a letter.

Now she claimed at first it was because her dad had found out she’d been seeing me but turns out he’d actually been pushing her to go on a date with his boss’s son. (A guy we went to school with and who was actually pretty OK.) I felt used and a little thrown away. I remember spending the whole time there neck deep in microwaved mini-pizzas and nachos that cost 6 bucks a pop.

From there it was a downward spiral of Doritos self-flagellation, Mountain Dew baptisms, and weeping into a lean cuisine harder than Oprah. Jared from Subway sneered down on me like a cruel god. 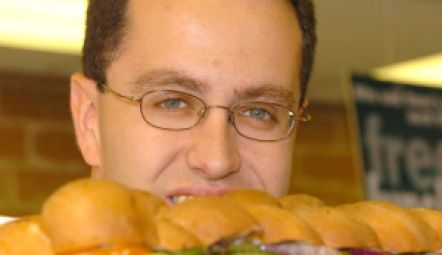 It went on like that until her dad got laid off. Then she called me up, crying and wanting to hook back up. I went back but it was just more of the same. It wasn’t long before I realized I was the only one dancing so I might as well just dance alone. I called it off and didn’t see her again for a while.

Fate loves a good fuck you, so we ended up picking the same backwoods college where another twist in the tale reared up. I was finally away from home and allowed to do what I wanted. Turned out that was get crazy drunk and party till I wasn’t sure who owned the clothes I’d woken up in. (no joke went to a party wearing one thing, came to in another house in someone else’s clothes…still have no idea what happened.)

She fed me some lines through a mutual friend and before long I was ready to give it another go. Only she wasn’t, like at all. Stringing me along might not have been the original plan but it ended up that way. She’d say she wanted to talk one day, then blow me off or ignore me when I showed up. Things got hot in a bad way, to the point where I got a restraining order and she was busted stuck in a window at my dorm at like 3 in the morning. (wasn’t even my room)

So yeah, that is the story of my first real relationship. Looking back on it and all the little things that I won’t add here, I understand the old saying “you never forget your first time.” I used to think it was about sex but it isn’t. It’s about the first time you opened up enough to let someone see whats under all the bullshit. The first time someone saw you, the real you, and walked away.

Stay frosty out there